We Need Fundamental Change, Not a Rushed Debate 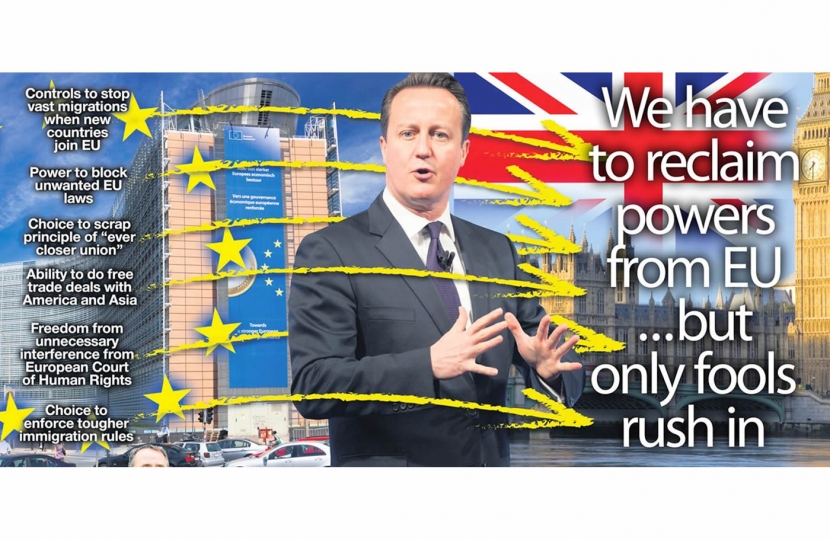 Writing for the Sun on Sunday on 31stMay 2015. The Rt Hon Dr Liam Fox wrote that the referendum on Britain's membership in the European Union cannot be rushed.

AT last we know. The election of a Conservative majority Government means the British people will, finally, be given a say on our future in the European Union.

This promise, kept so quickly, will go some way to restoring the public’s damaged faith in our political system.

Yet even before we have passed the necessary law to allow the referendum to take place, the debate has become highly polarised.

I think both cases are wrong.

Most people will be willing to give the Prime Minister time to take his case to our European partners and try to create a new balance that will be to the benefit of both the United Kingdom and the EU itself.

It is such a momentous decision for our country that we must take our time and get the best outcome possible before we take a final decision in a referendum.

The last time the British people were given a say was 40 years ago, so no one under the age of 58 has been able to express an opinion on this most important subject — and that’s including me. I was 13 at the time of the last referendum, which I remember vividly because my parents were strongly on opposite sides.

Those who voted for what was then the Common Market wanted to ensure Britain had a strong trading relationship with our European neighbours.

Many of those who voted yes now feel they were betrayed and sold into an ever-tighter political relationship with a Europe that they never gave their agreement to.

This referendum will be a chance to rebalance that relationship for future generations.

In 1975 Britain was a very different country. We suffered from high inflation and rising unemployment.

The Labour government of Harold Wilson was bullied by the trade union leaders at home and lived in fear of the Soviet Union in the Cold War abroad.

Many Britons abandoned our shores to seek a new life abroad.

Now Britain is a very different country, with an unemployment rate of 5.5 per cent, compared to 11.4 per cent in the Eurozone.

The City of London is the engine of the global financial industry and Britain attracts the lion’s share of all Europe’s inward investment.

Such is our economic success that people are desperate to come here to take advantage of our economic expansion.

Gone are the days when Britain was regarded as the sick man of Europe.

The constant crisis in the Eurozone, seen most clearly today in the Greek debt emergency, is directly due to the disastrous way in which the single currency, the euro, was introduced.

Millions of young Europeans, in particular, find themselves unemployed as a consequence of European economic mismanagement.

In Spain, 58 per cent of young Europeans find themselves on the dole, while in countries outside the Eurozone, such as Britain, youth unemployment continues to fall. The EU is no longer seen as an economic model to aspire to but a potential threat to global financial stability.

THE WORLD HAS CHANGED

In the Sixties and Seventies Europe was at the centre of the global political world and crucial to success in the Cold War against the Communist Soviet Union.

That world has completely altered.

The era of globalisation has seen the emergence of new powers and new centres of influence.

The rise of India and China — and the increasing confidence of Commonwealth partners such as Australia, New Zealand and Canada — means that Europeans can no longer regard themselves as being “at the centre of the world”.

Too many in the European political establishment have failed to understand that basic truth.

The Prime Minister is yet to formally set out the detailed areas upon which he is negotiating but there are several clear issues at stake.

The scale of European economic migration is a huge political problem in many parts of the country (though it still accounts for less than half of Britain’s total immigration).

Most people in Britain do not have a problem with immigrants who are coming to contribute to the wealth of our country. But they resent those trying to use British public services and the benefits system without putting anything in first.

In the City of London there are many who fear that there are those in Brussels, jealous of London’s success, who would use any new powers to handicap us.

They believe that London is in competition with Frankfurt and Paris. They are wrong.

The Chancellor has made clear his opposition to any European power grab, and this will be one of the central battlegrounds of the negotiations.

Yet the most important issue is a much more fundamental one. Many people, myself included, feel that too many of our laws are made outside of our shores — and that we must bring back powers to the United Kingdom Parliament so British citizens can make the ultimate decisions about how we are governed.

This argument, about sovereignty, is likely to be at the very core of the debate leading up to the referendum.

Those who are trying to bounce the British people into an early referendum should be resisted.

This is a once-in-a-generation opportunity we cannot afford to get wrong.

The British people rightly expect a full, detailed and mature debate on the options they will face.

Neither the “yes” campaign, nor the “no” campaign will have all the arguments on their side and we must have a fair, honest and transparent debate without bullying or scare-mongering.

That is why it is right to cut the Prime Minister some slack and allow him the time and space required to get the best deal possible.

We must then take our time before coming to a final decision.

For the sake of future generations, in Britain and the rest of the EU, it is important to be right . . . rather than quick.

The EU by numbers

Number of member countries when we joined: Nine

Odds on Britain staying in the EU: 1/2